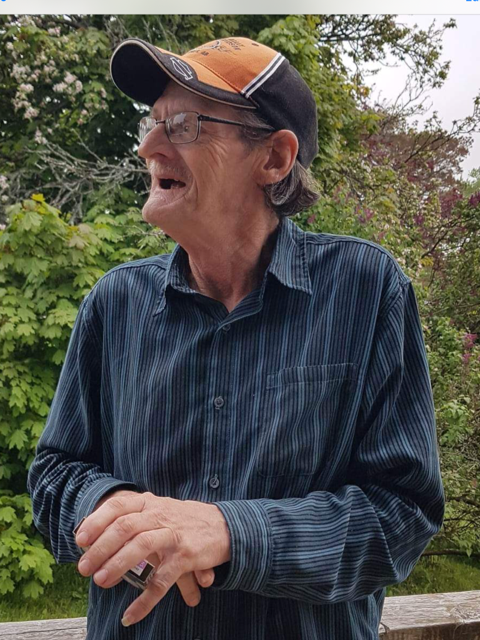 Please share a memory of John to include in a keepsake book for family and friends.
View Tribute Book

It is with the heaviest of hearts that we announce the passing of our beloved Father, Brother and Friend John G. Ryan, better known by those who knew and loved him as "Johnny Peanut Butter" and "Johnny Not Not." Johnny unexpectedly passed away, peacefully, on December 25, 2022.

Johnny was born in Arichat, N.S. on Jun 9, 1954. He grew up in Port Hawkesbury, N.S. and spent most of his life there. In 1978 Johnny, with the love of his life and their firstborn, moved to B.C. and spent decades there. They settled in Delta, B.C. and together they raised their five children. In his final decade he returned home to Port Hawkesbury to take care of his mother, whom he loved so dearly.

Johnny is predeceased by his parents, Gardiner and Catherine Marie Ryan. His sisters, Priscilla Ryan, and Anita Roberts (Bob).

His cherished friend and mother of his children, Joanne.

He is further survived by many nieces, nephews and friends that he truly adored.

Johnny will be fondly remembered for his love of Old Cars, Hockey, Country Music and Tim Hortons. He was well known for being a hard worker; always tinkering on anything that he could. He surely was a Jack of all trades. His ability to create something extraordinary out of the simplest thing was both amazing and inspiring! He had a cheerful and energetic personality that enabled him to make friends everywhere he went. His sense of humour was as big as his laugh, but his heart was even bigger! Johnny's love for family and friends was endless! And of course, we can't forget his love of peanut butter! “DUH!”

He will be so dearly missed by all his family and friends!

You are Forever in our Hearts JPB

In honour of Johnny's wishes no services will be held. A private burial of his ashes will take place early in the new year.

In lieu of flowers and to assist the family with cremation and burial costs, donations may be made to the go fund me page, or the Dennis Haverstock Funeral Home, Port Hawkesbury. Words of comfort may be forwarded to the family at: www.haverstocks.com

We are eternally grateful for any and all donations. https://gofund.me/dd0f3b9f

To plant a beautiful memorial tree in memory of John Ryan, please visit our Tree Store

Look inside to read what others have shared
Family and friends are coming together online to create a special keepsake. Every memory left on the online obituary will be automatically included in this book.
View Tribute Book
Services for John Ryan
There are no events scheduled. You can still show your support by planting a tree in memory of John Ryan.
Plant a tree in memory of John
Share Your Memory of
John
Upload Your Memory View All Memories
Be the first to upload a memory!
Share A Memory
Plant a Tree