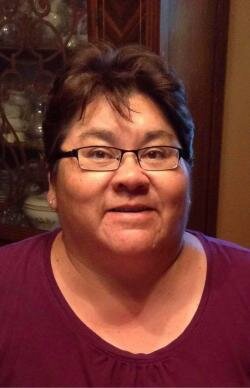 The Remembrance Store
Obituary
Please share a memory of Jacqueline to include in a keepsake book for family and friends.
View Tribute Book
Jacqueline Anne Toney, Age 56, We’koqma’q First Nation. Passed away peacefully on Monday, May 30th, 2022 in the Inverary Manor Long Term Care Home. Jackie was born in Baddeck, on September 3, 1965; she was a daughter of the late Benjamin Charles and Susan Charlotte (Googoo) Toney. She was well known for her kindness and generosity towards all who were fortunate to cross her path. She was employed for a number of years with the We’koqma’q Band as an Adult Care worker and helped many from the community. She was a mother, sister, aunt, godmother and friend to so many. Jackie also worked for 15 years as a teacher’s aide in the Wekoqmaq First Nation School known by staff and children as Miss Jackie. A very skilled crafter in beading of earrings and hairpins. One of her biggest awards was this year when she became an East Coast mama when her son Morgan won two ECMA awards this year, he often told his mom that when he gets his award, it would be given to her. Jackie is survived by her one and only son, Morgan Charles, sisters, Juanita Paul (late Dan J. Paul), Grace (Joe Mike) Paul and brother Bartholomew Toney of We’koqma’q; Sister-in-laws Laura "Elizabeth" Toney, Catherine Toney and Ericka Bernard. Loving aunt to numerous nephews, nieces and godchildren. She was predeceased by her parents Ben Charles and Susan (Googoo)Toney, brothers, John, Lloyd, Benedict, Albert and Fabian Toney; Sisters Dianne Toney and Lena Bernard ("Lunch" Lawerence Bernard) and Sister-in-law Annie Jane Toney and her beloved pet Sheba. Visitation will be after 4 p.m. Monday, June 6, until 11 a.m. Wednesday, June 8, with a traditional prayer service in the Community Centre, 15 Reservation Rd, We’koqma’q First Nation. Cremation to follow. Salite will follow at 12 noon, Wednesday in the School Gym. A private family service will be held at a later date. Funeral arrangements for the late Jacqueline Toney are under the care and direction of the Dennis Haverstock Funeral Chapel, Whycocomagh. Words of comfort may be forwarded to the family at www.haverstocks.com Visitation Information Visitation June 6, 2022 Visitation Time 4 p.m. Visitation Location Community Centre, 15 Reservation Road Burial Information Burial Date At a later date
To plant a beautiful memorial tree in memory of Jacqueline Toney, please visit our Tree Store
Read More

A Memorial Tree was planted for Jacqueline
We are deeply sorry for your loss ~ the staff at Dennis Haverstock Funeral Homes
Join in honoring their life - plant a memorial tree
Services for Jacqueline Toney
There are no events scheduled. You can still show your support by planting a tree in memory of Jacqueline Toney.
Plant a tree in memory of Jacqueline
Print
Events
Aug
08
Online Memory & Photo Sharing Event
Online Event
About this Event