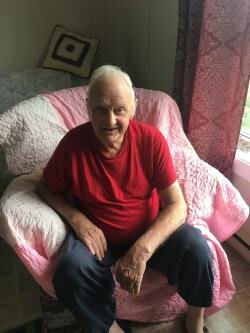 The Remembrance Store
Obituary
Please share a memory of Bernard to include in a keepsake book for family and friends.
View Tribute Book
Bernard Charles 'Bernie' Andrews Age 82 Lesterdale, Guysborough County It is with heavy hearts that we announce the passing of Bernard Charles Andrews, 82 years young, who passed away at home in the comfort of his wife and family on Tuesday, July 19, 2022. Born in Manchester, Guysborough Co., on July 9, 1940, "Bernie" was the son of the late Charles and Violet (Pelley) Andrews. Dad built a ‘fruitful life’ with his bare hands as he was a skilled carpenter and a laborer despite his lack of any formal education. He worked closely with his own father ‘Charlie’ early on and they built many things together. His father’s skills and creativity were instilled in him and passed down through the Andrews family generation. He took incredible pride in his work. Before Mom and Dad were married, he travelled back and forth to Ontario working various jobs. He was a ‘Jack of all trades’ and never shied away from a hard day’s work. He worked locally at fish plants in Mulgrave and Canso and spent a few years working with NS Power as a linesman. Our Dad made a living for his family through his own carpentry business, B Andrews Carpentry. Many houses exist in Guysborough today that were crafted with his own two hands, and he took pride in the restoration of the Old Court House Museum. Before retirement he spent many years working at the Belmont Resort as a maintenance worker and caretaker of the golf greens. His retirement didn’t slow him down, he enjoyed ‘tinkering’ around by fixing power saws and various equipment for people, filing saws, and making wood crafts. He kept his mind busy and continued to do various building projects when requested as everyone was aware of his competency in his work. Dad was a well-known and well-liked member of the Guysborough community and area. If you had the opportunity to be present in his company you were a better off person for it. He was a natural conversationalist and enjoyed having a good ‘yarn’ with anyone young or old. He had a quick wit about him and contagious laughter which was inherited by his daughter Gwen. He enjoyed fishing and hunting; many great memories were created with friends and family at the camp especially with his brother Donnie who was also a best friend. They had a wonderful bond and in particular the last couple of years as they were both battling cancer together; Donnie was a big comfort for Dad. Entertainment to him was listening to old country music from George Jones, watching a good round of boxing and a game of hockey. He liked to keep updated with current events and enjoyed talking to Merlin at the end of each day on what had gone on. Dad was a hard worker and always provided for his family as best he could. He built a life for himself and family on his integrity, work ethic, and skilled knowledge. His life was his schoolhouse, always learning throughout. He enlightened us and others with his story telling which usually ended with fits of laughter. Sometimes we wondered if the stories were true but nonetheless created wonderful moments and memories. Dad, we are so very proud of your courage, strength, and perseverance the last couple of years. You were always so positive and encouraging because I think you knew it was something we needed to hear. Even when you didn’t feel well you always gave a smile and pushed forward. It speaks to your integrity, strength, and will. That ‘Andrews’ fight was admirable, and we thank you for helping us to cope with all you were going through. It was setting us up for having to let you go someday, slowly, but on your terms. Merlin will miss the daily drop ins with you and Gwen will miss you waiting by the window when she came home to visit. Your absence is felt incredibly as the house is quieter without your voice, laughter, and good conversation. A special thank you to Mom for taking care of our father and remaining by his side always. Dad is survived by his devoted wife of 53 years, Patricia (Williams) Andrews, his children Rose Andrews, Merlin Andrews and Joshua Andrews all residing in the Boylston area and Gwendolyn Andrews, Kentville; his only grandchild, Jack Coady who shared the same birthdate as he did, July 9 th and whom he was so proud of. He is also survived by his brothers, William "Bill" Andrews, McPherson’s Lake; Donnie (Cheryl) Andrews, Boylston. He was predeceased by his brothers, Jerome and Floyd. Cremation has taken place. There will be no visitation; a service and burial will take place at a later date when it’s time for our Mother to be with him. Donations, in his honor, can be made to GOALS in Guysborough where his daughter Rose volunteers. Dad was a kind and giving man. He believed in ‘doing a turn’ for others. This is how he lived his life by doing good deeds regardless of the situation. In his honor, we ask that you ‘do a turn’ for someone that needs it and ‘pay it forward’. Until we see each other again Dad, rest in peace. We look forward to having a ‘good yarn’ again with you someday. Funeral arrangements are under the care of Dennis Haverstock Funeral Home, Guysborough. Stories, pictures, and words of comfort may be forwarded to the family at: www.haverstocks.com Visitation Information Visitation There will be no visitation Service Information Service Location There will be no service Burial Information Burial Location Burial at a later date
To plant a beautiful memorial tree in memory of Bernard Andrews, please visit our Tree Store
Read More

A Memorial Tree was planted for Bernard
We are deeply sorry for your loss ~ the staff at Dennis Haverstock Funeral Homes
Join in honoring their life - plant a memorial tree
Services for Bernard Andrews
There are no events scheduled. You can still show your support by planting a tree in memory of Bernard Andrews.
Plant a tree in memory of Bernard
Print
Events
Jul
21
Online Memory & Photo Sharing Event
Online Event
About this Event