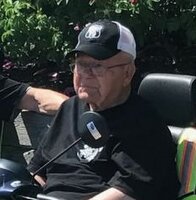 MacIVER, Richard John – Age 86, of Troy, Inverness Co., passed away on Thursday, October 21, 2021, in the Alderwood Rest Home, Baddeck. Born in North Sydney he was the son of the late John Lennan "Jack" and Elizabeth Ellen "Bessie" (Miller) MacIver. Richard owned and operated R.J. MacIver General Store in Port Hastings and was one of the last stores to deliver groceries to the country twice a week. He was a member of St. David’s United Church, Port Hastings and was a 53-year member of Solomon Lodge 46. He was well known for his stories and was one of Winnie Chafe’s biggest fans. Surviving is his loving wife, Noreen (Turpel) of 60 years; daughter, Joy Halfpenny, Fort McMurray, AB; son, John (Melissa), Fort McMurray, AB; sister, Betty (James) Langley, Port Hawkesbury; grandchildren, Trevor Jardine (Heather MacDonnell), Lesley (Rod) MacLellan and Randy MacIver; great-grandchildren, J.R. MacLellan, Marshall MacLellan and Bowen Jardine. He was predeceased by daughters, Colleen and Leslie in infancy; brother, Neil; sister, Mabel. At Richard’s request there will be no visitation or funeral service. Memorial donations in Richard’s memory may be made to the Port Hastings Vol. Fire Dept., or to a charity of one’s choice. Arrangements are under the care of Dennis Haverstock Funeral Home, Port Hawkesbury. Words of comfort may be forwarded to the family at: www.haverstocks.com Visitation Information Visitation There will be no visitation Service Information Service Location There will be no service